My favourite accessory at the moment is my Apple Watch.  I ordered it when it was first released and, although it isn’t perfect, I really like it.  I’ve used other smart watches and compared to them, this works a lot smoother and has a lot more features. 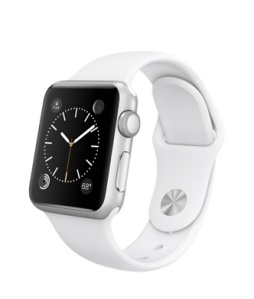 There are a few reasons why I really like it (especially compared to the other ones I’ve used).

These are my ultimate favourite things, but there are smaller things I love too.  It took me awhile to adjust to the interface, but once you get it down pat it’s fairly straightforward.  I have the Sport model, and the band is comfortable, although a little fiddly to get on in the morning through bleary eyes.  Once it’s on though, it stays in place and I’ve never had it undo.  I originally wanted the green band but wound up getting the white one to match more outfits.  It’s got a few little marks on it, but overall has stayed fairly clean given I’ve worn it every day.  There are about 8 different watch face layout options, which are then customisable.  Since the reason of version 2 of the software, you can chose your own background picture if you want, or you can use one of the preset ones.  There are both analogue and digital faces, and you can also add things like current temperature, moon cycle, sunrise and sunset, different timezones and how you’re tracking with your fitness goals for the day on the watchface if you don’t mind the clutter.  Overall, I’d recommend it if you’re thinking of spending some cash on a new watch or on something like a Fitbit.  It does set you back a little more, but it also gives you a lot more features.  I don’t know that I’d recommend spending big bucks on a more expensive model…I know they look a bit nicer but it is technology and technology isn’t timeless.  This is why I wound up getting the cheaper one.  It does the same job but means I won’t feel obliged to keep using it after it’s well and truly outdated.

And no, I’m not sponsored by Apple.  I wish I was.  I’d have a more blingy watch than a Sports edition!

This prompt, and may more, can be found here.